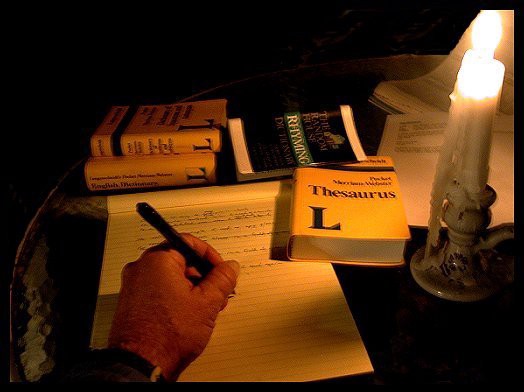 I've often been asked why I haven't written a novel yet, or even a short story on its own, let alone a collection of them.

While I've written enough poetry to fill several reams of factory fresh printer paper, and my prose on this very site could be collected, condensed, and categorized into an efficient little e-book, I simply cant find the motivation to write something that lengthy.

Stephen King once said in an interview that the secret to his prolific literary output was to, simply, write.

He sits at his desk every morning, puts his hands on his keyboard, and let's his fingers dance and twirl until 2000 words are peering back at him from the soft glow of his monitor.

I certainly admire such ardent consistency, and do actually apply it in my private writing, namely my journaling. But when books to be sold for mass consumption and profit are called into question, I suffer the inevitable bout of writer's block that eventually plagues us all so stubbornly.

In my opinion, forcing a piece of fiction is a little like pressing forward mechanically during sex, unaroused and uninterested.

If the attraction to the muse is absent, and one's passion isnt stoked by the idea of unifying with it, then the resulting experience is rigid, stale, and uneventful for all involved.

Believe me, I've tried to write novels, novellas, short stories, and bite sized pieces of fiction that clocked in at a little under 3000 words.

The folders on both my phone and laptop, as well as the obscure, cringeworthy early offerings I scrawled throughout my teenage years in fancifully adorned journals, rediscovered when I returned home from Naval incarceration, are filled to near burst.

These skeletal beings, caught in a maddening purgatory between completion and neglect, cant be called remnants, because that implies that they were once whole, and were steadily devoured by predators and prey alike until they were reduced to their present, ghoulishly decaying state.

You see, I've had the horrific habit of beginning potential stories with youthful vigor, only to abandon them when stricken by a semi-stiff breeze, since I first began to wield a pen at age 6.

Whenever I sit down to flesh out and breathe life into a new idea, whatever's enamored me at the time, I imagine a literary graveyard, sprawling and foreboding, stretching out and manifesting before me.

Eldritch, malformed beings, rendered insane by innumerable years of isolation and inactivity, besiege me, beseeching me to finish them, to grant them some of my coveted attention.

They're my children, assailing me to discover why I dont love them, and I'm the deadbeat sperm donor skipping out on child support.

"Ben, parched, fatigued, and weary, straddled his mount, Will-O'-The-Wisp, a former prize winning racehorse in another life, and grinned. Kicking one spur-heeled boot into her side, he tightened his grip on the mare's reins, leaning forward to match her suddenly maniacal speed. With the wind on his back, he'd hardly even bat an eye."

This was the beginning of a short story I'd planned to pen while drunk on whiskey one night.

The Irish Rose Saloon in Waikiki, HI, was a favored haunt, and its mix of constantly simmering danger and less than reputable clientele struck the right chord within me, one that would resonate for 3 years straight.

The bouncer, name withheld by request, was a BJJ purple belt, and he and I would roll right there on the floor. He was my knowledgable sensei and I was his living training dummy.

I remember pounding a double shot of Jack, my only drink of the night, since I'm notoriously lightweight, and, without really focusing on it, wrote that little morsel above.

The beauty of writing is that, once again from Stephen King, in his seminal work, "On Writing", it is the purest creative art form known to man.

Writing, done well and to a virtuosic degree, is essentially telepathy.

While they all require both a canvas and an easel, both of with take many shapes, stocked with all arrays of colors, vibrant and muted, boisterous and understated, writers can make you see exactly what we want you to, with nothing but words, a tool available to everyone, at anytime.

When you read that paragraph, an entire movie takes shape and life in your mind's eye.

Perhaps Ben is an outlaw in the American Old West, headed to San Francisco to begin a new life after a stage coach robbery gone bad; he won Will-O'-The-Wisp in a poker game.

Or, maybe he's a bounty hunter, existing for his entire life in that grey area that's so deliciously seductive that few who find themselves there ever depart of their own accord, myself included. His target is trying to get the hell out of Dodge, so he's set his sights on arriving there, hotel room already reserved.

I could spend the rest of my life filling pages, both physical and virtual, with examples, assumptions, and suggestions, and die of decrepit old age without even scratching a fraction of a percent of the possibilities that the above sentences are capable of birthing in someone's imagination.

Perhaps I will finish a short story, or several, one of these days. There's an art form to every type of writing, and I dont want to ever consider myself nothing but a one, or few, trick pony.

Two writers that often inspire me, when I sit in repose and remember them in both admiration and consideration, are Emily Dickenson and Maya Angelou.

Emily spent her entire life writing her immortal works in seclusion, a single candlelight her only company on her solitary, poetic quest.

Maya, when she felt crushed by the encumbrances of the world, would go to her special room at a local hotel; it was always reserved for her, stocked with pens and notebooks.

She'd check in and pay the clerk, unlock the door, shed her problems temporarily, and enter.

She'd sit at her desk and begin to let the words flow, likely fully cognizant of the fact that, in addition to her contemporaries, she was also simultaneously writing for those that had yet to even be born.

These spirits keep me company on evenings like these, and warm my lonely heart long after the waning, lively moonlight is inevitably hushed by the rising, awakening sun.