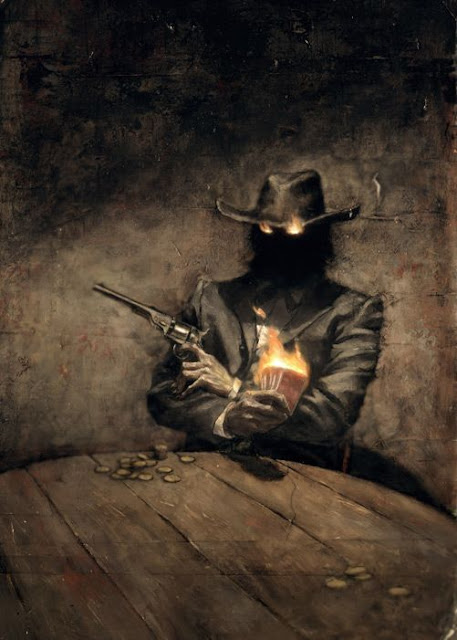 There's a restaurant, Brigantine Steak and Oyster Bar, in Coronado, California. When I was stationed there for 14 months, I used to skulk past it every evening.

In San Diego, $1,000 is beneath the contempt of chump change, so to say I was living a hand to mouth existence was gratuitious. Half the time there wasnt anything in my hand that made it worth the effort to expend the calories necessary to lift it to my face.

I decided, once I discovered Seven Mile Card Room in nearby Chula Vista, to call upon my dormant poker skills to keep me afloat. I would play every Friday and Saturday, buying in for $200 at the $2/$3 No Limit Texas Hold'em table.

There's an equation that helps a poker player determine their "M-Ratio". Its essentially a way to determine how you should play according to your chip stack.

It was pioneered by "Action" Dan Harrington, one of the most prolific players of all time. Within the world of poker, it's rare to find a player that excels at both cash games and tournaments.

The skill sets are simply too diverging to be exceptional at both, but Dan Harrington was one of the vaunted few to accomplish the feat. In short, he knows his shit.

He named the M-Ratio after Paul Mangriel, another talented professional gambler, backgammon player, and mathematician.

To find your M, you add the big and small blinds together, and include the antes, if they're present. You then take that sum and divide your chip stack by it. So, with a $200 stack, and 2+3 equaling 5, my M was 40.

Anything above 20 means that you can actually play poker, and every move, from preferential hand selection to aggressive check raising, is available to you.

Between 10 and 20 means that speculative hands, such as small pairs and suited connectors, begin to lose their value, because your declining chip count negates the implied odds and effective stack size necessary to make playing them worthwhile mathematically.

To complicate matters even further, a gift from Murphy himself, you have to perform basic multiplication on the fly as well.

The M-Ratio equation assumes a full table of 10 players. When that number dips below 10, you must multiply it by 10, then move the decimal point two steps to the left, to turn it into a percentage.

You must then multiply your Effective M, the quotient from the prior equation, by said percentage to learn your True M.

Speaking from my own life, I sat down with the aforementioned stacks and blinds, making my Effective M 40. But there were only 8 players at the table.

So I multiplied 40 by 80% to get 32, the product being my True M. This still meant that I could play utilizing the full breadth of my abilities, but I was also closer to falling below 20, which would force me to rely more on memorized probability tables, rather than pure poker skill.

All of this was going through my head constantly and unerringly, all to win $50 to $100, which would allow me to eat at In-N-Out for another week, rather than begrudgingly trudging to the fucking galley, with its crunchy rice and rubbery, tasteless chicken.

Returning to the earlier mention of the Brigantine, I used to fantasize about walking in there whenever I wanted, for breakfast, lunch, or dinner, but preferably all 3.

Tonight, playing at Thunder Valley, I made a profit of $155, all by deploying the knowledge and skill earned over more than a decade.

These talents are the product of battles waged over the felt and arduous, laborious hours of studying every night back home.

When I returned to San Diego as a civilian in November of 2020, I stayed at one of the nicest hotels on Coronado Island for a week, and ate at not only the Brigantine, but McPhersons Irish Pub and The Henry nearly exclusively.

All of these extravagances were paid for by money I'd made at the poker table.

Every day for 4 hours I'd go to work back at Seven Mile Casino, routinely winning using the abilities I'd bled to build, a dream realized only after I'd been baptized in sweat, blood, and tears in continuous pursuit of my dream.

When I was 25, a local retiree that also played at Seven Mile, who had the bad habit of consistently winning almost all of my money every time we played together, told me that you could consider yourself a true rounder when you supported an area of your life with naught but money you made on the felt.

Well, Sir, I've achieved that goal and earned the title, and it's far sweeter than any other I've ever been addressed by.

In this era of unemployment, uncertainty, and unrest, we're all being forced to tighten our belts and loosen our minds.

All of us, no matter how much they hide or deny it, possesses a skill that can be used to begin a profitable side hustle.

I've known mine, and I'm blessed beyond words in that regard, but at the end of the day, regardless of my affinity for reading subtle changes in body language and voice tonality, and despite the reams of probabilities and statistics I've committed to memory, I'm still gambling.

This means that, running counter to all of my consistency, I could do the completely correct thing and still lose my money, all because some idiot catches a lucky card on the River that he had less than a 4% chance of getting (more like 4.16%, but I digress).

For all of you reading this that are intimidated by the ambiguity involved in striking out on your own, take comfort in the fact that the fruits of your labor will never be seized from you mid-bite by the cruel and fickle hands of fate and fortune.

You know what your niche is; pursue it with relentless tenacity, and dont quit until you've realized all that you're capable of.

Once again, speaking from experience, it beats the living fuck out of working in a factory in a way that makes prime Mike Tyson look tame.

I'll see you out there.