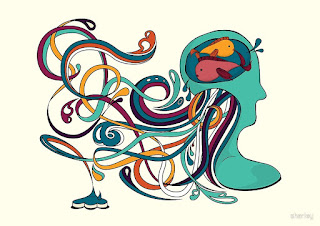 Cradling you in my arms was akin to holding my heart within the confines of my chest.

With each steady, rhythmic beat, both yours and mine, combined and syncopated, I relaxed, our breathing gradually and comfortably falling into a graceful stride.

Swans sailing softly over the surface of a serene pond, two doves joined majestically in flight, bonded by a twin route unseen but felt, not instructed but instinctual.

Your hair plumed and billowed out florally, artfully unkempt and uncommonly beautiful.Controlled chaos, the staining of glass with the nectar of the Earth.

Silently, I beheld your skin, smooth and unsullied, the twin product of judicious application of lotion post-shower and Nature's flawless design. If my own is roughened, callused and worn, then yours is inviting, delicate and luxurious, unmolested by the devastation of life.

Your body is a vast savannah, filled with wondrous landscapes and packed with miraculous terrain.

Your valleys flow and curve, sensuous and hypnotic, whether bathed in glittering moonlight or wet with morning dew.

You are the Truth I am too cowardly to speak, too petrified to face, and too stubborn to embrace. I wash in your waters and worship at your altar, cleansed and renewed at the conclusion of every meeting.

You are a Goddess, granting hope and promise, eradicating the clouds of confusion and obfuscation that mire me with a casual wave of your hands.

Suddenly your hazel eyes shoot open, and you view me lazily in the drunken stupor of interrupted sleep.

I lean over to pull the covers back over your exposed shoulders, and read the temperature at 75 degrees. I grin and kiss you, deeply and fervently.

I'm on the precipice of sweet catatonia before I'm roused once again by your grumpy, hoarse whisper.

I check my phone. It hasn't even been 15 minutes.

The temperature remains undisturbed, and I consider committing murder.

When I first arrived here, one of the most touted benefits extolled to me by its eager adherents was Hiking

I admittedly didnt avail myself much of the opportunities available to me through much of my stay, and I cant say that I regret it.I eschewed the treasure box of hikes that proliferate on Oahu in favor of Waikiki.

I was introduced to the concept of the Urban Vision Quest when reading Bold And Determined, and wrote about it myself back in August of 2017.

As such, I essentially became the chief cartographer of the city, crawling through it on a seemingly endless night that's lasted for over 2 years.

I recall with great zest and pride spending entire offstrings there, sleeping in my car while training and showering at a nearby 24 Hour Fitness. It fit well with my nomadic, untethered preferences, and prepared me for the lifestyle I plan on following in the future.

Eventually however, as with all things, I exhausted my options in South Shore. Nothing remained uncharted, and I at long last began to venture out.

Upon some introspection, I realized that I shied away from hiking for so long because I had to constantly deny invitations from a certain cowardly pussy I'm unable to name.

I'm sure that if I did, he'd likely sue, all while threatening physical violence from a safe distance, only to flee from repeated opportunities to make good on his jarring but amusing yipping and posturing.

Fortunately he removed himself from my life by way of blocking me for heckling him, thus relegating himself to continued isolation and ineptitude with women.

He hasnt committed suicide yet, but I'm told he continues to drink himself comatose nightly, so here's hoping he drowns in liquor, or asphyxiates while deep throating the bottle.

For my money, I'd prefer the latter. It would be absurdly comical.

Anyway, I recently hiked Diamond Head, feeling like a despicable tourist all the while. Before I depart Hawaii, I'm going to tackle every trail I can, both listed and unlisted, like I was diagnosed terminally ill.

Haunting the corner of any chosen diner, bar or coffeeshop, I often observe people. Human beings are social animals, and removal from conversation and regular contact has been shown to leave one devastated, delirious and disturbed.

Even if one claims to desire privacy in any of those said locations, which I am certainly guilty of, you cant deny that the craving for interaction and social stimulation is still present, yearning to be satisfied, even if it's in a passive, nonchalant fashion.

I've done this throughout the world, a passing transient temporarily considering the fixtures of that particular part of the globe, and one thing that every local watering hole has in spades are those I've deemed hermits.

They'll usually be sequestered in the nooks and crannies of said areas, heads down and eyes darting, shifting between bothersome reality and their own private worlds. Other times they'll be present in plain sight, holding space but ignored by the masses.

My sense of humanity and compassion aches for them, as I read them to be suffering silently from some ailment, whether physical or mental, though the source is irrelevant.

Muttering to themselves nonsensically, downtrodden and meek, I imagine them quietly plagued by depression, anxiety, regret, guilt, or the PTSD so symptomatic of past brushes with overwhelming abuse.

They may experience large gaps or absences in their memories, or may not even trust their own minds anymore, tense and pacing, nearly cracking from waking and walking daily under the strain of a murderous, immolating mind.

I read so often about medical outreach programs, both to our own inner cities and the 3rd World, where philanthropic, angelic medical professionals from a myriad of disciplines ply their trade for free, desirous of no recompense but the knowledge that they've helped those in need that otherwise would've gone untreated due to some aberration of economics, class or geography.

I wish that, in all major and minor cosmopolitan areas, there were centers set up that were staffed with round the clock counselors, psychologists and psychiatrists, dedicated solely to aiding those boiling in the hellish waters of their own failing and declining mental health.

I know this would require financial planning, affluent and unmitigated, and though lofty, it is a worthwhile goal to work towards for an entire lifetime, not just an idealistic Summer.