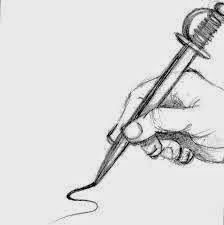 Some mornings, ever since mid-2015, I awaken shuddering, driven mad by some ephemeral, sourceless anxiety. Haphazard and random, these aren't full-fledged attacks, but light skirmishes. They're easily dispatched by reading, writing, or training, yet their echoes linger annoyingly, loitering deep in the caves and caverns of my peripheral vision.

I've quelled my anger and vanquished my demons, driving them back into the craggy stone of my vast mental maze, wings brushing at jagged rock and twisted steel, before slaughtering them indiscriminately and fervently. Give those voices no compassion or quarter, cede no ground, for anything that plagues you so maliciously is a roadblock, a ponderous encumberance preventing you from becoming everything that God intended.

As I record these vicious, cathartic thoughts, I can sense the current shifting, the distant hum of unease fading into the ether, the irrational, baseless nervousness that greeted me at dawn dissipating gradually, disappearing completely and leaving no trace of its unearned occupancy in the castle of my consciousness.

If we are not our thoughts, then we certainly aren't our emotions, since the latter are spawned from the former. I've battled mental illness in both myself and my kin, blood and battle, far too passionately to grant it even a single fragile, insignificant victory.

Find your ghosts and eradicate them ferociously. They deserve nothing less than genocide, born of love and compassion for yourself and others. Not all violence is evil, though the world at large will never grasp that simple, hard won truth. And that's fine.

I've lived apart from what society would typically expect of a young man for so long that reentry into this atmosphere is alien. As details of it flood my memory, I'm taken aback by how easily I reintegrate, how effortlessly I reacquaint myself with the spectre of Giovanni GQ, pampered and innocent PUA, high off the fumes of his own ego.

I've grown grounded these last few years, selfless and forgiving. I raise spirits rather than fists with alarmingly often, and feel a pervading sense of calm taking over me. I've extended my olive branches once more, and have made lots of new friends.

Unintimidated by the prospect of violence, I waded into every social situation as an outsider, an extraterrestrial observer, content to occupy myself with books and writing, rather than practice the Venusian arts as passionately as I once did, with a precise exactitude that bordered on the neurotic.

Mark Manson wrote that vulnerability, the expression of it and personal display of its requirements is the only way to truly captivate and keep a woman. Routines, models and lines only go so far, and at this point of my life they feel like commandeering a capsizing ship.

I'm paradoxically unashamed yet sullied regarding the way I used to approach and view women. After the Summer of 2014, the majority were little more than a collection of body parts, a riddle to be solved as ergonomically and efficiently as possible so that I might've partaken in Nature's sweetest nectar. What a daft, useless fool I was.

I will never apologize for my inborn, instinctive and masculine sexuality, but I am eternally remorseful for the shallow manner in which I used to pursue the fairer sex, unless of course that was all they sought in turn.

Trekking along the path set by Zan Perrion has been far more rewarding in every aspect, carnality assumed and assured. To be singed by the fire fueling and driving the spirits of these delicate divinities ever skyward by sheer force of will and ambition is a narcotic like any other. Permeate her mind, and sex becomes a mere afterthought.

I loathe being entangled in social graces, crumbling artifices of a bygone area that they are. I am very direct by nature, and though I may enjoy the occasional waltz across the stratosphere of expectations and rules set about by folks so staunch they make the Victorians seem like Flower Children at Woodstock, I have little patience for the resulting rumor mill.

If a fatally misinformed miscreant wants to pretend we're still prepubescent and imprisoned in the stifling halls of Junior High, that's his prerogative. I however, possess testicles, and would rather manually reconfigure his features, boxing style, Paleolithic as it sounds.

Likewise, if I bear fortunate witness to a beautiful, enticing woman in a club or coffeeshop, I will proudly declare my legs broken when she expects me to hop through the requisite and expected hoops like a trained beast. I'd rather publicly acknowledge said beast, and approach her transparently, courageously and honestly. It's always worked better for me personally anyway.

The Coffee Bar's hours are waning down, the figurative setting sun on my splendid sanctuary. Tea reawakens my dulled senses, lulled to dormant catatonia by my vivacious vice, Jack Daniels. Two nights ago, present at my friend's 21st birthday, I drowned my insides with Fireball Whiskey, referred to secretly as Sorority Bait in a past life in the South, and Crown Royal Apple, a favorite amongst my Hawaii cohorts.

It reminds me of Fairgrounds Coffee in Ghent, Virginia, a condensed microcosm of a college masquerading as a city, the student body studying, drinking and fucking within Old Dominion University just blocks away. The bohemian, vaguely Hipster vibe appealed to me as I sipped mint and Earl Grey tea and bled poetry.

Cami, one of the first women I met that painfully beneficial summer, introduced me to, among other things, the wondrous gyro, a Greek delicacy and veritable paradigm shift for a guy that grew up worshipping the hamburger in all of its delicious variations.

Jazz whispered sultrily to my creative sensibilities from a mahogany record player broadcast on both floors through creaky, aged speakers. The work I put out in that opulent corner of my exile is forever lost, inscribed in numerous notebooks and tapped into the Text application of a misplaced, broken cellphone.

While hunched over this new one, sequestered at my table partaking in the delicious tea that bears my namesake, I pull the brim of my black hat down deep as if to camouflage myself, and turn my gaze inward, attempting, futilely and in vain, to grasp those forgotten verses and paragraphs.

The rebellious mists of my personal history may never diminish or dissipate, which makes no difference. Life continues onward, and the alphabet still harbors the same 26 essential elements. My periodic table.