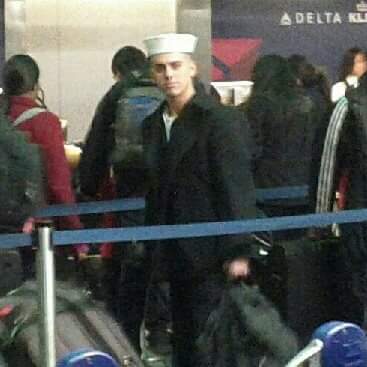 
Today marks 6 years since I began my enlistment, and coincidentally, had I not extended, I would be free today.

As a younger man, when the home and world I knew were unmolested by the ravages of change and the life I left behind was still relatively intact, if you had offered me a path out of the military, I would've seized it feverishly and greedily, determined to free myself from what I perceived as stifling bondage.

Now, staring down the barrel of 27, I fear gaining that complete autonomy back. I feel institutionalized in a backwards, ironic way, more like a convict on the precipice of parole than a Sailor a short time from mustering out of service.

I've gained skills and credentials that render me employable nearly anywhere, and have cultivated a healthy collection of contacts that span not only several states, but countries on either side of the world's oceans.

I've gained 40 pounds of muscle since I initially left home, and saved a large portion of my money, nurturing a growing fascination and passion for investing along the way.

I have no Earthly reason to harbor the trepidation I do, yet, when caught in the throes of another predatorial panic attack stalking me ravenously in the still of the night, I am shaken and petrified.

We all had our private reasons and motivations for joining, all admirable and laudable, even if some are comparably mundane when measured against others.

Regardless, once we were trapped and weighed in the belly of our beloved beast, we were overtaken by a sense of collective awe at being absorbed by and committed to something larger and more meaningful than ourselves.

Jaded though many veterans grow as the years march on, either colluding with us rhythmically in synchronous step or dragging us along, unwilling sycophants rebelling eternally against a seemingly indifferent, disturbingly efficient machine, deep down, we all recall fondly, nostalgically and proudly the moment we swore that oath, dedicating ourselves to walking this uncommonly arduous path.

This uniform has permeated my skin, coating my soul blue and green, thick with the dark soot of perpetual effort. It has blessed and burdened me with a sense of purpose unknown to society at large, and though I may remove it, relegating it to a dust infested closet in California, it will forever remain taut against my weary frame.

For too long I lived imprisoned by the enrapture of a long expired muse. The one I loved most had forsaken me, 4 years ago today, for a variety of factors.

I was hardly innocent in the matter, though infractions weighed just as heavily upon her. As time has passed though, I've since learned and matured, and proven willing to shoulder my share of the blame, hatred and pitiful shade spewing.

I should've treated her better in a variety of fashions. My criticism became furious, demeaning and belittling, fueled by a frustration with the state of both her and our relationship. Yet my commitment never waned, and cheating never crossed my mind.

As the days bled into weeks and the weeks melted into endless agonizing months I obsessed over every minute issue, whether real or imagined. I was certain of uncertainty only, bereaved and beaten yet deathly determined that if I could only atone for some non-existent sin or trespass, she would be mine again.

Deployment shook me from that imprisoning reverie, and after landing back in San Diego I attempted to make things right. I was spurned and ignored for my troubles, demoted to the level of pestilence and unsightly offender, turned away coldly and, in her eyes, righteously.

How many nights have I wasted revisiting happier moments with you, the phantom figure guiding my pen in multitudinous love poems and verses proclaiming infatuation and a monastic promise to breathe fresh vitality into your festering crypt?

But I am no necromancer, and will not be lorded over by a ghost. Fate decrees all, whether ominously or beneficially, and as life plows forward, new paths are found amidst the rubble of what we once held so dear, the facets of our lives that we once considered essential and indispensable.

We've both since carried on forward, taking new lovers and embracing their hidden challenges. But yours was secured before I had even set back out to sea, to be healed by the ravages of unforgiving labor and blunt, traumatic reality, strength granting me opulence as always.

I was a footnote instantaneously, and while I skulked around those Eastern frozen wastes you scurried with him to carnivals, dinners and group outings. I laid demented, shattered and broken in tepid water, tattooing the ramifications of our separation permanently into my fractured heart.

But those tattoos are fading, and the scars are worn proudly. I shudder to imagine the magic I've let slip through my calloused fingers as I foolishly entertained this unrequited grief.

Today, on the 4th anniversary of that dreaded, collapsing phone call, I relinquish these cancerous traces of our love, resigning them to the abyss you so spitefully and unhesitatingly tossed me into.

No longer will this shade be cast over any potential relationship I may have, shamefully declaring that I was unavailable because I was still shellshocked from lost love. My life flies upward from this day on.

I forgive you, and wish you well.

My Naval anniversary, the culmination of my original pledge to the military, is nearly concluded. In typical fashion, I slept right through it, though in this instance I'm working nights, so I have a semblance of an alibi to justify my laziness.

I've learned recently that true freedom lies in allowing grudges born of any event to evacuate your chest, to slip away with the rapidity of the wispy smoke floating from a cheap cigarette lit against the wind.

Deal with what you must, and fulfill your innermost requirements for reconciliation with adamant fervor and judicious devotion, while always examining them objectively and professionally.

I am a wholly different being than I was in 2012, tempered and weathered, a stone solidified from the unstable constituents of adolescence.

I owe myself a nice dinner.